Skip to content
Home / Everyday Uses / Apple Cider Vinegar in Your Laundry, Why? It might sound kind of odd. Why the heck would you use apple cider vinegar in your laundry? Believe it or not, there are a host of benefits of using ACV when washing your clothes. In this article, we’ll discuss those benefits, including removing stains, softening the water, and more.

Among the most powerful benefits is that you can avoid the traditional, chemical-infused products that will potentially cause long-term damage to your health. For example, traditional fabric softeners and laundry detergents can: Some additional benefits of using ACV as a natural detergent is that it is hypoallergenic and it won’t conflict with fire-retardant materials. This makes it safe to use when cleaning your children’s clothes.

With all that being said, simply add ¼ cup of ACV to a full laundry load. Sorry, it’s not much of a recipe.

While we have your attention, we’ll discuss the many other benefits apple cider vinegar provides for your health and overall quality of life. And there is no shortage. After all, it’s been used as a healing elixir as far back as 400 BC.

In fact, raw apple cider vinegar was used by the godfather of modern medicine – Hippocrates. Hopefully, the following list will leave you grabbing for a bottle of ACV rather than a bottle chalked with harmful chemicals.

If your home is filled with a distasteful odor that you can’t seem to get rid of, pour some ACV in a bowl and leave it near the unpleasant odor to eliminate it quickly. It’s not exactly a secret that vinegar works as a great household cleaner. Less known, though, is that raw vinegar includes the organic, bacteria-fighting characteristics that traditional vinegars are missing. To rid your home of toxins and grime, mix a concoction of equal parts water and equal parts ACV. And don’t forget the elbow grease! Drinking ACV helps fill you up, encouraging you to eat less during and in between meals. Moreover, studies have shown that the acids found in ACV help to slow down the accumulation of fat. Now, many people won’t find the taste especially satisfying. So try mixing with juice, tea, or in certain foods.

Note: You can find natural ACV weight loss pills that offer a range of health benefits. ACV is very effective at relieving cold symptoms, such as congestion, cough, and sore throat. Breaking up mucus is one of the substance’s many talents, making it an excellent decongestant. In addition, its ability to fight bacteria will help keep a sore throat at bay. (You might try making your own Hot Toddy recipe). Treating sunburn and skin issues is a very popular use for apple cider vinegar. Simply apply directly to the itchy or sensitive area for relief. Note that it can also help with the itchy after effects of poison ivy and bug bites. Believe it or not, ACV can sparkle up your teeth simply by swishing some in your mouth. Dilute with 2 parts water and then brush your teeth like you usually would. If you’re having stomach problems, or you anticipate tummy troubles from an extravagant dinner, sip some diluted ACV to settle your digestive system. Thanks to its antibiotic properties, and bacteria killing power, add ACV to your tummy trouble fighting arsenal. Apple cider vinegar isn’t just good for detoxing your home, it can also be effective at detoxifying your body. The acid it contains helps remove toxins from the body, while also promoting circulation, breaking up mucus, and clearing up the lymph nodes. 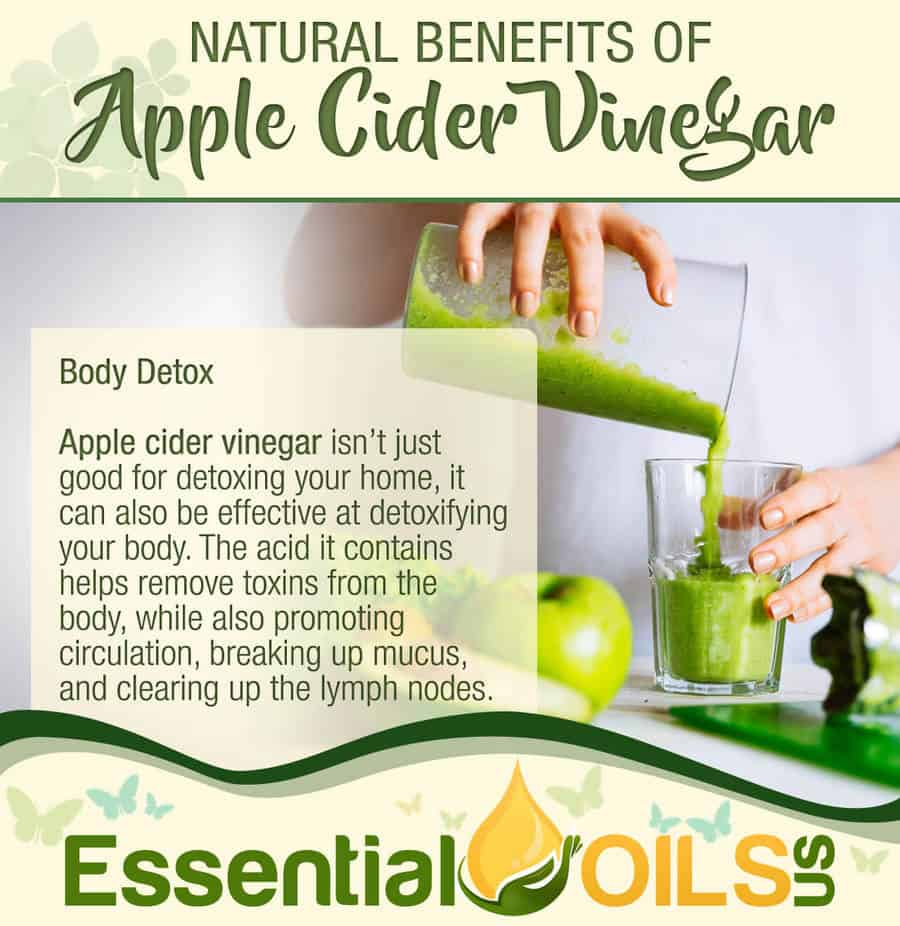